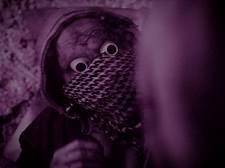 A man rescues a boy and later tries to get him off his back but to little avail, so they end up drifting around a subterranean world, populated by grotesque masked figures. A hundred years after Chaplin filmed his first feature film, The Kid, Norbert Pfaffenbichler offers an experimental punk-style interpretation, which the filmmaker himself has defined as a dystopian slapstick film.