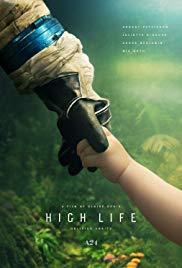 The survivors of mankind are in capsule on a suicide mission while the crew doctor desperately tries to breed with the last humans alive in strange witchcraft sperm rituals. After many years a man and his daughter are the only survivors.
The controversial film of genuine artist Claire Denis (1946) is a true Alienated film and was one one of the inspirations for this year's main theme. What effect does endless space travel have on humans when confronted with the extinction of their kind?