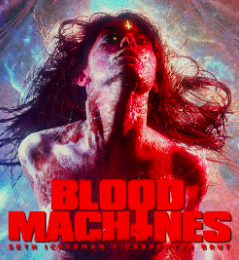 Inspired by the spirit of the 80's films and music, BLOOD MACHINES is a 50-minutes science-fiction film written and directed by Seth Ickerman, scored by the synthwave artist Carpenter Brut.
BLOOD MACHINES is the sequel of the music video TURBO KILLER, their first collaboration.
Two space hunters are tracking down a machine trying to free itself. After taking it down, they witness a mystical phenomenon: the ghost of a young woman pulls itself out of the machine, as if the spaceship had a soul. Trying to understand the nature of this entity, they start chasing the woman through space...
plus intro Turbo Killer