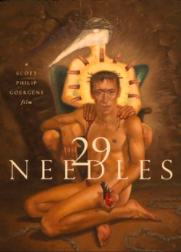 29 Needles is a psycho-sexual body horror that follows a disturbed man with an obsession for pain and sex, as he explores his darkest sexual desires. These obsessions lead him to try things most wouldn't dream of. The pain he inflicts upon himself is no longer working to hold back the horrors in his head. As he gives in to his most forbidden desires a whole new side of him awakens, a side that he no longer struggles to hide.

For some people, a warning is at its place about this film, a lot of men shall watch this movie with crossed legs because even watching this movie hurts a lot! - for others, this may sound like a recommendation. Underground cinema at its best and most extreme. BUT film festival is pleased to mention the director Scott Willem Georgens and distributor Unearthed Films.