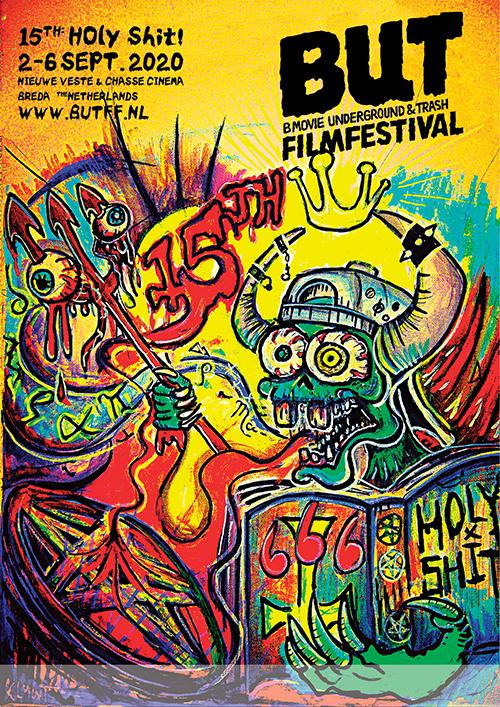 Especially now, because the BUTFF (B-movie, Underground & Trash Film Festival) is going ahead. From 2 to 6 September 2020 in the city centre of Breda, in De Nieuwe Veste (Centre of the Arts) and at Chassé Cinema. It’s not yet completely certain what this anniversary edition of the festival will look like exactly, but one thing is definitely certain: we are going to celebrate our 15th birthday.

This year’s theme is BUTFF 15th: HOLY SHIT!
Holy Shit! A theme with three layers. The expression stands for astonishment and disbelief, but also for ceremonial, ritual and cults. When we selected this theme at the end of 2019, we could never have imagined how appropriate Holy Shit would become, in this tense new era with new and at times confusing rules and rituals.

**HOLY SHIT! now what?!
BUTFF has never been afraid to take on a challenge and we’re organising a special festival this year.
Obviously, it will not be business as usual. For example, there won’t be 5 screening rooms but 2 (larger ones). One in De Nieuwe Veste and one at Chassé Cinema. A home cinema will be set up in the form of live-stream film screenings, interviews with the directors and a chatroom to connect with other viewers.
And beyond that...? We will follow the rules laid out by the government. With every loosening we will come up with new ideas and flesh out the programme with art, pop-up performances and more.

**HOLY SHIT! 15 years of BUT Film Festival, we did it!
It should have been (and will be!) an extra festive edition, because BUTFF is 15 years old. Every year the audience numbers grew, and every year we screened more films, had stronger performances and better bands. BUT Film Festival has turned into a well-known, grown-up festival, and will continue in the same vein.

**HOLY SHIT! theme programme
The 2020 edition of BUTFF 2020 will be dedicated to ceremonial, ritual and cults. We plunge into the obscure and the occult; a heathen mass, as it were, in which paganism flourishes. Witches, cannibals, insane cults and The Great Satan himself are on the programme.
In a world where everything and everyone is constantly viewed by others, there is a growing fascination with what shouldn’t be seen. The violence of the occult depicts that side of man in which his darkest fantasies emerge.

END_OF_DOCUMENT_TOKEN_TO_BE_REPLACED

A group of students from Breda University of Applied Sciences did their project for BUT Film Festival 2020.