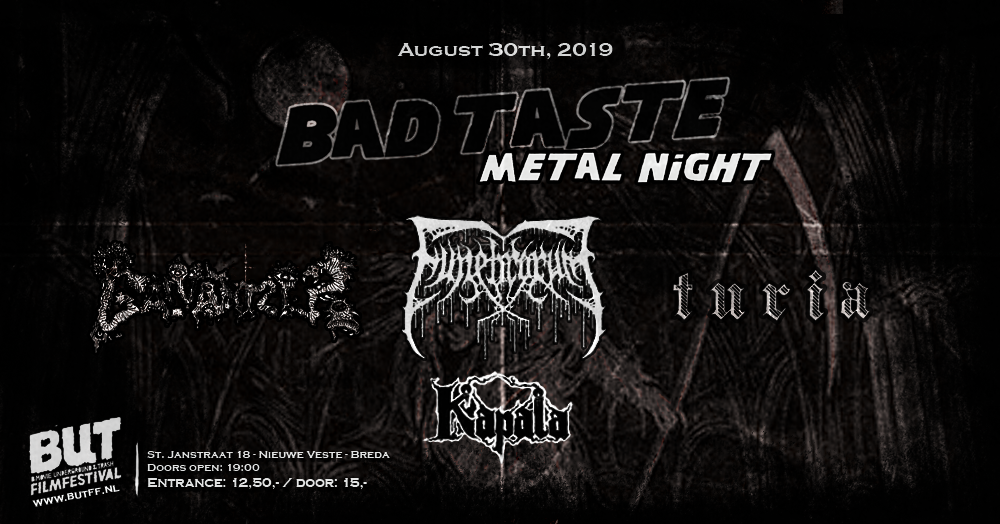 This year the BUT Film Festival & Bad Taste present to you... The Bad Taste Metal Night on Friday 30th August 2019!

TURIA (NL) - Haeresis Noviomagi
Turia was started in the winter of 2014/2015. The band aims to evoke gripping black metal, stripped to its bare necessities. Utilizing a minimal setup of drums and guitar they bring to life a mirage of sound while anguished screams drag the listener into a vastness of desolation. Their first album “Dor” is a strong statement of purpose in both its fury and its entrancement. Four tracks of minimalistic rage and power will put Turia on the map for those seeking worth within the rubble of our modern world.

GALVANIZER (FIN) - Me Saco Un Ojo Records / Everlasting Spew Records / Extremely Rotten Productions
Formed in 2013 as a one-man project, it grew to 2 members in August 2014 and they recorded their debut demo “Ground Above” later that year. The demo offered their first take on brutal, grinding death metal with lots of energy, grittiness and overall crudity to the recording production and song writing. 2015 saw their first release with a new drummer and therefore a solid line-up for the band and they recorded and released the EP “Horrid Tales of Death” and followed the release with playing shows several places in Finland and Denmark in 2016. They recorded their debut album “Sanguine Vigil” that was released in early 2018 to much praise from the international metal community.

KAPALA (GER)
German black death gem with their first gig outside of Germany! Kapala tries to make ritual music and live shows to worship the highest form of spirituality that arose from the infinite chaos. The intention of sound and lyrics tries to awoke the god that lurks deep in ourselves!