Why don't you just die!

Why don't you just die! 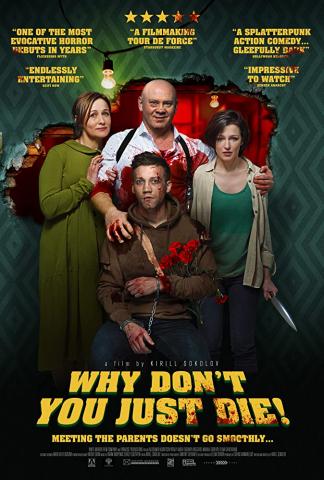 Andrei, a detective and the world's most horrible father, brings together a terrible group of people in his apartment: his resentful actress daughter Olya , an angry thug, and a cheated cop. Each one of them has a reason to want revenge.
Matvey barely gets a foot in the door to court his love interest Olya and finds himself amidst the most horrible violent clusterfuck of his young life, chased by the overprotective Andrei. Everyone is left with one message only for Andrei: Why don't you just die!
A debut film from Russia that has it all: a twisted tale of ultra-violence, comic book characters, and the most incredible camera angles in a surreal setting.